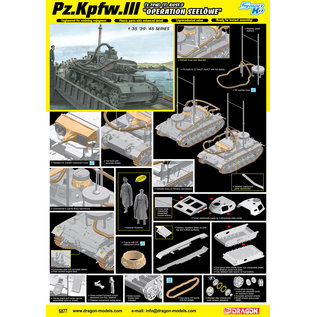 It was planned that Germany would conduct an amphibious invasion of Great Britain under the codename Operation Sea Lion (Seelöwe), and to this end a number of Panzer IIIs were especially converted into diving tanks. These were known as the Tauchpanzer III, and they had the ability to drive along the seafloor totally submerged thanks to a breathing apparatus. One variant prepared as a Tauchpanzer was the Panzer III Ausf.F, of which German industry produced 435 units between September 1939 and July 1940. They had a 3.7cm KwK L.46.5 main armament fitted in the turret.