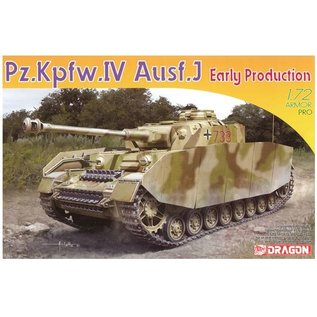 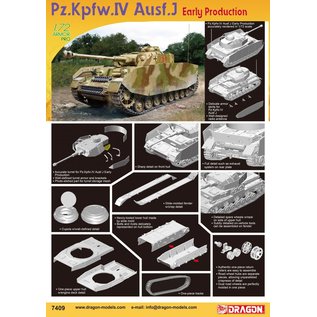 Dragon Armor Pro has yet another brand new Panzer IV tank in 1/72 scale available for modelers wishing to expand the number of variants in this important tank family. This kit depicts the Panzer IV Ausf.J Early-Production. About 3,160 Ausf.J units were produced from February 1944 through till April 1945. In most respects, the Ausf.J was a retrograde from the previously produced Ausf.H, a necessity imposed on Germany to simplify production as the war progressed. For example, there was no electric generator for the turret traverse, so the turret had to be rotated manually. Pistol and vision ports on the turret side hatches were removed too.

This latest 1/72 scale kit possesses the ultimate level of detail. For example, it has a newly tooled lower hull possessing different details on the bottom. It shows the correct identifying features of an Early-Production Ausf.J. Yet another small niche in the Panzer IV family has been filled with this new kit, and modelers can enjoy obtaining the whole range that reflects the history of the Panzer IV.