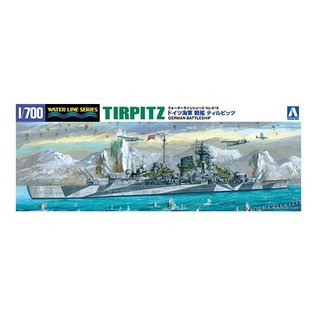 Although completed in February 1941, compared to the spectacular battles of the same type of ship, the Bismarck, the Tirpitz had no such battles, giving the impression of a battleship simply hiding in a fjord. However, this motionless battleship forced the Royal Navy to place an extremely powerful naval force of two or more battleships in the northern Atlantic until November 1944, when the Tirpitz was sunk. Because of the presence of the Tirpitz, Britain was unable to devote sufficient forces to the war in the Mediterranean Sea, and was forced to fight an uphill battle against Japan until 1945, when it finally joined the campaign. The Tirpitz's greatest achievement was the destruction of the Allied PQ17 fleet, but the attack on the fleet was a result of aircraft and U-boats, and the Tirpitz did not fire a single bullet. However, one of the factors in the destruction of the fleet, which was under heavy guard, was the fact that the Allied military escorts were alerted to the Tirpitz's sortie and, as a result, unraveled the flotilla and moved individually towards the Russian objective, which ultimately led to the destruction of the flotilla. It can be said to be an achievement that it was an effective deterrent.